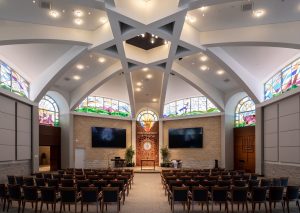 B’nai Jehudah moved into its 69th and Holmes facility in 1957. The migration of our members to Johnson County, Kansas accelerated over the next several decades, especially among young families who sought to enroll their children in the Shawnee Mission and Blue Valley School Districts. Many Jewish institutions moved to Johnson County, including the Jewish Community Center in 1988 and Menorah Medical Center in 1996.

In 1989, B’nai Jehudah paid $565,000 for 12.8 acres of land on the east side of Nall Avenue at 125th Street in Overland Park. The initial plan was to build an educational facility and chapel there, with remaining land for a future sanctuary if and when the Congregation decided it might want one. However, the plan then was to conduct worship at 69th and Holmes, continuing our presence in Kansas City, Missouri that existed since our founding.

In 1990, the Jewish Federation and United Jewish Appeal launched Operation Exodus, a nationwide effort to raise funds for the resettlement of Jews from the former Soviet Union. The Jewish Federation of Greater Kansas City asked local Jewish organizations to suspend their own fundraising efforts to prioritize Operation Exodus and B’nai Jehudah’s board agreed. Development of the land in Johnson County was temporarily put on hold.

Operation Exodus concluded successfully, both in terms of fundraising and immigration. Congregations were free to resume raising funds for their own needs.

Mid 1990s
On October 4, 1993, B’nai Jehudah’s Johnson County Task Force had its first meeting under the leadership of Donna Thalblum (president 2015-17) and Mike Fishman. The 32-member task force sought congregational input from surveys, focus groups and open meetings. It delivered a report to the board on January 24, 1994, recommending a capital campaign that would fund the construction of a primarily educational facility in Johnson County. The recommendation included funding for repairs and renovation at 69th and Holmes.

B’nai Jehudah’s board approved a campaign and Irv Robinson (president 2001-2003) and Donna Thalblum agreed to lead the effort.  Robinson focused on fundraising and Thalblum focused on the building with then Executive Director Joe Boston. A fundraising consultant was retained and Temple leadership set a goal of $8.5 million including $6.5 million for the educational facility, $750,000 for renovation and repairs at 69th at Holmes and $1.25 million for the endowment fund.

In the meantime, the board reassessed land requirements including parking needs for large events. In early 1995, it voted to sell the land and begin looking for a larger site in Johnson County. The initial parcel was sold for $715,000 on October 22, 1997.

On April 11, 1996, the board approved the $2,080,000 purchase of 24 acres of undeveloped land on the west side of Nall Avenue, south of 123rd Street, where our present facility is located. The seller was Dardanelle Timber Co., an affiliate of the Sutherland family (Sutherland Lumber). By the end of 1996, the capital campaign had secured enough pledges to move ahead with the project.

B’nai Jehudah hired Hansen, Midgley, Neimackl Architects to design what would be known as the Learning Center. The local firm was selected for its experience in designing outstanding school buildings. The design included classrooms, a pre-school, office space for the religious school, a chapel, kitchen, and a large multi-purpose gathering space.

Construction was completed and B’nai Jehudah occupied the Learning Center in April 2000. Worship and ritual activities continued at 69th and Holmes and offices for clergy and administration remained there as well. Mid-week and religious school classes were taught at the Learning Center.

University Academy began operations as a non-profit college preparatory charter school in Kansas City, Missouri in 2000. Shirley and Barnett Helzberg, longtime B’nai Jehudah members, were among the founders of University Academy. The Academy was looking for a mid-town location for a new campus and approached then Temple president Irv Robinson about the possibility of buying the 69th and Holmes property. The Helzberg Foundation made a generous offer for the B’nai Jehudah property, which was accepted by the Temple’s board in 2002. We also sold some property in Rose Hill Cemetery.

University Academy razed the old temple building and began construction in 2004. It occupied its new campus the next year.

Shirley and Barnett Helzberg were married in B’nai Jehudah’s Mayerberg Chapel in 1967. To preserve its sense of history and ties to Rabbi Mayerberg, University Academy’s community meeting space is named the Rabbi Samuel S. Mayerberg Hall in his honor.

University Academy now enrolls 1,000 students in grades K-12, and has been recognized by the U.S. Department of Education as a Blue Ribbon School. Its mission of providing top educational opportunities to Kansas City, Missouri students is closely aligned with B’nai Jehudah’s long history of social justice activism.

B’nai Jehudah consolidated all operations at 12320 Nall Avenue in 2003. A few classrooms were converted to offices for the Senior Rabbi and administrative staff. Weekly Shabbat Services were held in the chapel. The Congregation held High Holiday services at the Overland Park Convention Center and Church of the Resurrection for the first couple of years. Later, High Holiday services were held in our own social hall with a video feed to the chapel.

2019 Renovation
The Learning Center was stretched beyond its intended purpose and needed repairs after 15 years of busy use.  Senior Rabbi Arthur Nemitoff encouraged our lay leadership to consider a major renovation and was closely involved in the process. In 2015, a small task force headed by Ira Stolzer (president 2003-05) and Mary Davidson (a vice-president at the time) began to study the Congregation’s physical needs and costs of making changes.

The Task Force engaged Rogers Krajnak Architects of Columbus, Ohio, which earlier planned a renovation at Rabbi Nemitoff’s former congregation in the same city. Rogers Krajnak prepared a facilities analysis, architectural programming study and a master plan to transform the existing building into one that could serve as a full-service synagogue. They gathered input from a variety of stakeholders including clergy, staff, teachers, board members and the congregation at large.

The board approved a capital campaign with a goal of raising $12 million, which was achieved with broad participation. The campaign co-chairs were Irv Robinson, Ira Stolzer, Donna Thalblum, and Gail Weinberg along with Rabbi Nemitoff.

Bill Carr (president 1987-89), an experienced real estate development attorney, chaired the building committee. This committee solicited proposals from many local architectural firms and construction companies. Based on their presentations, the building committee, with board approval, hired HOK Architects to develop a revised master plan and design the project. McCownGordon Construction was chosen as general contractor.

HOK and the building committee worked together for many months during 2018 to achieve a design within the basic footprint of the existing building. The focus was on function, enhancing Jewish spirituality and creating community. The project modestly increased square footage on the building’s south side.

The renovation included the use of Jerusalem stone in the religious spaces.  A large menorah, created by local artist and artisan Norman Brunelli for the 69th and Holmes sanctuary in 1967, was placed in our expanded main entrance lobby. Four stained glass windows, designed by artist John La Farge for B’nai Jehudah’s Linwood and Flora building in 1908, were also brought out of storage and reinstalled.

Michael Klein, long-serving chair of our Art Committee and a former board member, is a decades-long collector of Judaica.  Concurrent with the building renovation, Klein gifted his extensive collection to B’nai Jehudah and provided funding for a curator/educator. Pieces from the Klein Collection are prominently displayed in museum-quality exhibit cases in the entrance lobby. The new Memory Murals of the Michael Klein Collection were commissioned for B’nai Jehudah’s commons area and depict various aspects of our history.

The Congregation vacated the building in early 2019 so construction could commence. We held weekly worship services at the Jewish Community Center and High Holiday services at Church of the Resurrection. Administrative and clergy offices were moved to rented space in southern Johnson County.

The renovation project was completed within cost estimates in November 2019. A well-attended weekend of activities in the building was held November 15-17 and included Shabbat services, a Sunday morning pancake breakfast sponsored by Brotherhood and a community open house Sunday evening. The building was rededicated as part of our 180 Menorah Shabbat Chanukah service on December 27.

The Covid-19 pandemic hit in March 2020, just four months after we had reoccupied the building. Ironically, new technology that was included in the renovation allowed the Congregation to live-stream worship services and other programming online during the next 15 months, when the building was closed for the pandemic. Staff worked remotely for many of these months.

The building was reopened to limited in-person worship in May 2021.