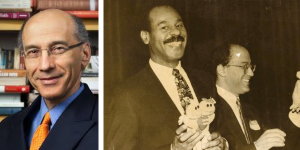 Early Life
Michael R. Zedek was born in Brooklyn, New York in 1946, the only child of first-generation Americans Mildred and Benjamin Zedek. His father, the son of an ordained orthodox rabbi, dropped out of school in eighth grade to help support his family. Benjamin Zedek formed socialist leanings, married and moved his young family around the country before planting roots in Albany, New York.

Benjamin Zedek eked out a modest living from his automotive radiator repair shop in Albany. He yearned for a better life for his son, one that would be based upon a life of the mind. The family belonged to a conservative synagogue in Albany and Michael dropped out of religious school after his Bar Mitzvah. He was active in the Young Judea youth movement and was elected New York state president during high school.

Michael won a full scholarship to Hamilton College in Clinton, New York, about 100 miles from home. Personal tragedy befell the family during Zedek’s freshman year when his beloved father died of cancer at the age of 58. His father’s dying wish was for Michael to become the first generation of their family to earn a college degree. In fact, when Michael discussed dropping out of Hamilton to help his mother, his terminally ill father responded by slapping Michael and demanded that he finish college.

Zedek excelled academically at Hamilton, where he majored in Philosophy of Religion, and graduated Phi Beta Kappa in 1968. He won a Fulbright-Hays Scholarship that funded a year of post-graduate study at the University of Aberdeen, Scotland. Upon returning to the United States, Zedek took a job at Syracuse University teaching English and writing.

The Director of Admissions at Hebrew Union College-Jewish Institute of Religion (HUC-JIR) learned about Michael Zedek by looking for Jewish names among recipients of the Danforth Graduate Fellowship, which Zedek had also received. They began corresponding by mail and the admissions director had high conviction that Michael would make an excellent rabbi. Zedek was not enthusiastic about becoming a rabbi but accepted the Director’s challenge to try the program for one year. He stayed, spending his second year of seminary in Jerusalem, and received his ordination in 1974.

B’nai Jehudah Assistant Rabbi
In early 1974, Rabbi Silverman and past president Martin Fromm traveled to the Cincinnati campus of HUC-JIR to recruit an assistant rabbi. They interviewed and were impressed with Zedek. Michael accepted B’nai Jehudah’s job offer, moved to Kansas City that summer with his then-wife Naomi (they divorced in 1988), and he began what would become a 26-year engagement with the Congregation.

After a few months in Kansas City, Zedek observed that B’nai Jehudah had many members but low participation. Our building at 69th and Holmes Road reminded him of a Jewish cathedral. “It was pretty empty in terms of activity,” he said. With Senior Rabbi Silverman’s support, he began to experiment with activities designed to boost involvement. These included an Israeli film festival and a mini-university for adult study.

In the mid 1970s, the congregation offered two evening and morning services each for the High Holidays due to capacity constraints. Rabbi Zedek recalled his first High Holiday sermon here when a mass exodus of congregants headed for the doors just before he began speaking. “Was it something I said?” he quipped. That comment brought laughs and some people sat back down to hear what the young rabbi might have to say.

Senior Rabbi
When Rabbi Silverman left the Congregation in 1976, Michael Zedek was named interim Senior Rabbi. At that time, the Reform movement’s Rabbinic Placement Commission had a rule that a candidate must have ten years of experience to apply for a senior rabbi position at a congregation of our size. Zedek did not qualify.

The Congregation’s board wanted Rabbi Zedek to have the job but leaders of the Placement Commission were firmly against it. Eventually, Irvin Fane, a B’nai Jehudah past president and former chairman of the board of The Union of American Hebrew Congregations (now the URJ), worked out an acceptable plan and Zedek was hired as Senior Rabbi.

From the beginning of his rabbinate here, Zedek’s goal was to change our culture to one where congregants would “do Jewish” for themselves as opposed to delegating it to clergy and staff.

In the early 1980s, the Congregation started a Para-Rabbinic program where lay people were trained to assist with lifecycle events. We formed havurot, small groups of people who met regularly outside of the Temple building. A few of the original groups continue meeting to this day.

Zedek delivered dynamic sermons, often beginning with a parable. The topics frequently were related to some aspect of social justice which he believes is part of the Congregation’s DNA.

He also began leading congregant trips to Israel, believing that the Jewish people’s return to Israel is nothing short of miraculous. This represented a change from B’nai Jehudah’s Classical Reform roots where Zionism was not a priority.

In the Community
Rabbi Zedek joined an interfaith clergy group in 1975 and immediately established a connection with Emanuel Cleaver II, an African American pastor. Both wore their hair in an Afro/Jewfro style that was popular in the day, both were young and new to the city. They recognized that the narratives of their people overlapped in substantial ways. Cleaver was pastor of St. James Gregory church, now St. James United Methodist Church. This relationship grew over time, and the two congregations enjoyed pulpit, choir and student exchanges, as well as other joint activities. For a number of years, St. James members gathered with B’nai Jehudah members at the Temple for Martin Luther King Day activities.

Cleaver was elected to the Kansas City Council in 1979 and became the city’s first African American mayor in 1991. At his mayoral inauguration, Cleaver was sworn in with Rabbi Zedek holding B’nai Jehudah’s Holocaust Torah scroll, reflecting the ties that existed between St. James and the Temple.

Cleaver also appointed Zedek as chair of the Mayor’s Red Flag Commission whose charge was to investigate municipal corruption in Kansas City and formulate policies to make it less likely to occur in the future. This appointment was a fitting coda to the work of Rabbi Samuel Mayerberg who crusaded against municipal corruption the 1930s.

Cleaver is currently serving in his ninth term as U.S. Congressman from Missouri’s fifth district.

Refuseniks and Russian Immigration
The term Refusenik refers to a person in the former Soviet Union, usually Jewish, who had applied to emigrate but was refused permission by the Soviet government. Some of these Jews got out in the early 1970s, most choosing to go to Israel or the United States. But, others were not permitted to leave and often were victims of discrimination and the loss of employment.

B’nai Jehudah sponsored the Yvgeny Yakir family of Moscow and made regular phone calls to them and in their behalf to the Soviet embassy. Associate Rabbi Mark Levin headed the social justice committee and traveled to visit the Yakirs. He brought them articles of clothing that could be traded for money, as well as Judaic material. The Yakir family was eventually permitted to immigrate to Israel. (Rabbi Levin was the founding rabbi of Congregation Beth Torah in 1988.)

Jewish Family Services of Greater Kansas City was heavily involved in resettling immigrants from the former Soviet Union during the 1970s and 1980s. Most knew very little about Judaism as religious study was prohibited in the Soviet Union. B’nai Jehudah made memberships available and welcomed these émigrés into our community.

Rabbi Zedek saw an unmet need to serve recently arrived Russian Jewish immigrants in Kansas City. He recruited Victor Rashkovsky to come to B’nai Jehudah as a student rabbi. Rashkovsky was born in Kiev in 1940 and was studying at HUC-JIR. He traveled to Kansas City from Cincinnati bi-weekly 1979-1982.

Rashkovsky was ordained in 1983, the first Russian immigrant of his generation to become a Reform rabbi. He has served as a congregational rabbi in Oak Ridge, Tennessee for the past 38 years where he will become Rabbi Emeritus in July 2021.

1990s
The geographic center of the greater Kansas City Jewish community shifted to Johnson County, Kansas over several decades beginning in the 1960s. By the beginning of the 1990s, the Jewish Community Center had moved to Johnson County. Beth Torah was established as a Reform congregation in Johnson County in 1988. Many B’nai Jehudah families had children in the Shawnee Mission and Blue Valley School districts and found the commute to 69th and Holmes to be inconvenient for mid-week Hebrew School.

The Congregation responded by offering mid-week Hebrew School classes at a rented satellite location in Johnson County. These early Johnson County initiatives led to the decision to build at 12320 Nall Avenue, initially as a Learning Center.

In 1993, Rabbi Zedek partnered with a Catholic priest and Protestant minister to broadcast a weekly radio call-in talk show, “Religion on the Line.” The show has been running continuously on Sunday mornings on KCMO radio for 28 years and Zedek is one of the two founding hosts still on the air.

Another of Rabbi Zedek’s interfaith initiatives was Sacred Seeds: Children of Abraham Reading Sacred Texts Together. Congregants from B’nai Jehudah, several Christian churches and, eventually an Islamic mosque, came together for religious study in these years.

During the 1990s, Rabbi Zedek continued his pastoral, counseling and teaching work in the Congregation; served as a Kansas City, Missouri Police Department Chaplain; and served on the Board of Trustees of Baker University in Baldwin City, Kansas. He was instrumental in fundraising for the Congregation’s Nall building.

Rabbi Zedek admits that one of his shortcomings was time management. After 26 years of serving B’nai Jehudah, he was in his mid-50s, and found himself working an 80-hour week with little time off. He began thinking about his own mortality. He considered that his father died at 58 and his dear friend Rev. Thom Savage, a Jesuit Priest who was President of Rockhurst College, died at 53. He began envisioning how he wanted to spend the rest of his working days with a goal of spending more time with his second wife, Karen, and his children.

B’nai Jehudah honored Rabbi Zedek in conjunction with its 130th anniversary on January 8, 2000, with a dinner and entertainment at the Muelhebach Hotel. He became Rabbi Emeritus later that year.

Post B’nai Jehudah
Michael Zedek accepted a job as CEO of the Jewish Federation of Cincinnati in 2000. The job appealed to him as a way to have more personal time while still being able to enjoy building community, which was one of his passions. After leading the Cincinnati Federation for four years, he came to miss the interpersonal aspects of being a Rabbi and sought a pulpit in a smaller congregation.

In 2004, Zedek became Senior Rabbi of Emanuel Congregation in Chicago, which had about 200 families at the time. He revived Emanuel and grew its membership to 400 families before becoming Rabbi Emeritus of that congregation in 2016.

Rabbi Zedek is relocating back to Kansas City, where he will be teaching a course in Judaism for divinity students at the St. Paul School of Theology here beginning in Fall 2021.

He says of his long rabbinic career, “Every day someone touches your heart and, if you are fortunate, you get to do the same for them.”

Click here to read the Charles N. Kimball Lecture delivered by Rabbi Michael Zedek on October 23, 2000. He discusses his experience in and observations about Kansas City.