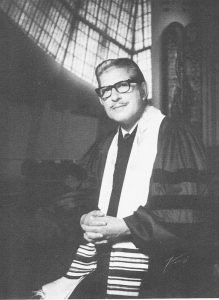 In May 1959, Rabbi Samuel Mayerberg informed B’nai Jehudah’s board that he would retire after 31 years of service to the Congregation. Mayerberg privately let it be known that he hoped Rabbi William Silverman would be hired as his successor. Mayerberg had unsuccessfully tried to recruit Silverman to serve as B’nai Jehudah’s Associate Rabbi in 1951.

On December 30, 1959, after the pool of candidates had been narrowed to two, B’nai Jehudah’s board unanimously selected Silverman as its new rabbi. The Congregation approved him a week later and he served the congregation 1960-1976.

William Bertram Silverman was born in 1913 in Altoona, Pennsylvania, the birthplace of both of his parents. His family moved to Cleveland in his early youth and he worked a variety of jobs to supplement the family’s income. He was raised in a conservative synagogue in Cleveland where he taught and conducted youth services. One of his fellow teachers was Pearl Bailes, who became his wife after a six-year courtship.

Silverman began his rabbinic studies at Hebrew Union College in Cincinnati in 1935. He was elected President of the student body during his last year at HUC. One of his assignments in that role was to serve as a guide to visiting alumnus. He met Rabbi Mayerberg for the first time during one such visit.

Silverman was a vocal proponent for integrating Nashville schools, which did not win him any friends among segregationists. In March 1958, dynamite was detonated at the Nashville Jewish Community Center, luckily with no injuries and minimal damage. Minutes after the blast, a caller from the “Confederate Underground” called the Silverman home and told Pearl Silverman that her husband’s temple would be bombed next. Rabbi Silverman responded by announcing that his sermon the next Friday night would be titled, “We Will Not Yield!” Despite more threats, he delivered the sermon as planned. Armed guards were stationed at his home and the rabbi reluctantly carried a gun for protection for the next six months.

Rabbi Silverman left Nashville and began serving B’nai Jehudah in 1960. He introduced changes in his first year here including: Shabbat evening family services in alternate months; a memorial service at Rose Hill Cemetery on the Sunday during the high holidays (which continues to this day); and a noon-hour service on Yom Kippur for those desiring to spend the entire day at temple.

Silverman transitioned B’nai Jehudah away from classical Reform Judaism and towards mainstream Reform Judaism of the era. These changes included more Hebrew (with Sephardic pronunciation), more ritual observance, and B’nai Mitzvah ceremonies (formerly called Reader of the Torah at B’nai Jehudah). Lay people were allowed to recite Torah blessings during services for the first time. Some Temple members resisted these changes but the board generally supported them and the rabbi.

Our present-day custom of consecrating children entering Religious school was re-established by Silverman, and 61 children were consecrated in 1960. He began a post-confirmation class for students who were juniors and seniors in high school.

Silverman was a prolific writer and dynamic speaker. Attendance at Friday night services was rarely fewer than 400 people – and frequently many more than that. Some congregants remember his commanding presence on the pulpit, in full robe with outstretched arms.

The nationwide baby boom peaked around 1957. B’nai Jehudah’s membership grew significantly in the 1950s and 1960s, to the point that the Congregation was challenged to serve all of its members in a personal way. In 1961, the board set a membership cap of 1,400 family and single memberships. The limit was raised to 1,500 in 1963. Religious school enrollment was at an all-time high of 1,057.

To alleviate overcrowding, B’nai Jehudah sponsored the founding of another Reform congregation in 1958. Temple Beth El received organizational support and financial assistance from B’nai Jehudah. By 1963, Beth El had completed a building at 9400 Nall Avenue in Overland Park. Beth El was later dissolved and its former building is currently a church.

In 1967, a group made up primarily of B’nai Jehudah members and former members organized The New Reform Temple. It offered a smaller congregational experience (membership capped at 225) and was founded on the principles of classical Reform Judaism. We lost an estimated 120 families to New Reform in its early years.

Despite these two new Reform congregations in town, B’nai Jehudah’s membership continued growing and reached 1,850 in 1972.

The Congregation began a capital campaign for new sanctuary in 1963. Ground was broken in 1965 and the iconic sanctuary at 69th and Holmes Road was dedicated in 1967.

Rabbi Silverman was active in engaging with other faith groups during his tenure and received standing ovations in his early local community appearances. He was a participant in a monthly broadcast on WDAF radio that also included a Protestant pastor and a Catholic priest.

He continued pursuing civil rights activism through his leadership of the Greater Kansas City Council on Religion and Race. This group pushed for fair housing throughout 1965-66. At the rabbi’s urging, B’nai Jehudah’s Board endorsed the effort. The Kansas City Council enacted fair housing legislation in 1967 after considerable campaigning by Rabbi Silverman and his allies.

In 1976, Rabbi Silverman was 63-years-old and moved west to Palm Desert, California to become rabbi of Temple Sinai, where he served for a number of years. He passed away in Scottsdale, Arizona in 2001, at the age of 87.

Twenty eight-year-old Michael Zedek was hired as B’nai Jehudah’s Assistant Rabbi in 1974 and succeeded Rabbi Silverman when he moved to California.