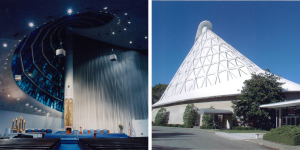 Great demographic changes swept the United States beginning with the close of World War II. The end of the 1930s economic depression and return of American soldiers from overseas sparked a baby boom that would last nearly 20 years. Reflecting broad prosperity and the formation of many new families generally, B’nai Jehudah’s membership reached 900 families and individuals in 1948 compared to 450 in 1932. Sunday school enrollment nearly doubled to 545 in 1951, from 280 in 1943.

B’nai Jehudah had been occupying its Linwood Boulevard Temple since 1908, a midtown facility that was built when the congregation had about 200 members. During the 1950-51 school year, Sunday school was so over-enrolled that the Congregation resorted to double class sessions in order to accommodate all students.

Another emerging challenge was B’nai Jehudah’s location: the Kansas City Jewish community was migrating south. Forty percent of Temple members and nearly 60% of families with children in religious school lived south of 63rd Street in 1951. The time had come for a fourth congregational home.

At the May 1951 annual meeting, the Congregation approved a plan to raise funds for a combined school building and social hall on a site that would allow for the later addition of a sanctuary. On January 3, 1952, B’nai Jehudah closed on the purchase of 5.5 acres on the east side of Holmes Road, between 68th and 69th Streets. The site was next to a public park and adjoined Rose Hill Cemetery. The land was purchased for $50,000 from J.E. Dunn Construction Company. Clarence Kivett, a B’nai Jehudah member, was engaged as architect.

A capital campaign was launched in the summer of 1952, with a goal of raising $1 million. But, fundraising proved difficult and only half of the goal had been reached by the end of the year. By 1954, construction costs had escalated and sufficient funds had not been pledged. Further, the Congregation was divided about allowing B’nai Mitzvah ceremonies, a change that was opposed by some potential large donors. A compromise was reached to allow a ceremony to be called “Reader of the Torah.” It included many of the same elements that are familiar in our present day B’nai Mitzvah services.

With this controversy settled, the capital campaign reached the initial goal of $1 million and the Congregation authorized a $200,000 mortgage to complete the project. The design included a chapel (later, the Mayerberg Chapel) set in a terraced courtyard, along with 32 class rooms, a social hall seating 1,000, a youth lounge, scout room, library, boardroom, and rabbis’ studies and offices.

Ground was broken February 5, 1956, and the new building was completed in April 1957. The social hall was utilized for Shabbat and holiday services until 1967, when the sanctuary was added.

The building featured an originally commissioned ark, Ner Tamid, and 16-foot-high bronze “Moses” exterior sculpture which was cast at the foundry of Bruno Bearzi in Florence, Italy. That piece is currently displayed at the Congregation’s Nall Avenue facility.

A building committee under the leadership of past president Irvin Fane began plans for a sanctuary in 1962. At the May 1963 annual meeting, architect Kivett presented a modern sanctuary design that was approved by the membership. The new sanctuary would have pew seating for 700 and was expandable with portable chairs for an additional 300 worshipers.

In 1963, The Congregation began another capital campaign with an original goal of $900,000. The campaign was broadly supported with more than 80% of members making a pledge. Estimated construction costs escalated by over $200,000, and the membership approved a mortgage in 1965 to cover the higher cost.

The groundbreaking for the new sanctuary was held on February 21, 1965, and construction took more than two years. The sanctuary dedication took place May 5-7, 1967.

The Architectural Record magazine featured B’nai Jehudah’s sanctuary in its July 1969 issue. It said, “The sanctuary evokes one of the oldest structural forms, the tent, but translated into today’s materials and methods. And the interior, punctuated by an 83-foot-tall concrete center pole, provides a big, serenely uncluttered space permeated by soft blue light from the spiraling skylight.”

The Holmes Road facility served B’nai Jehudah well during its peak membership years. However, many Temple members moved to Johnson County, Kansas during the ensuing years and the Congregation completed its fifth building at 12320 Nall Avenue in Overland Park, Kansas in 2000.

Adapted from Roots In A Moving Stream by Frank Adler, z”l
April 16, 2021
Photos show the interior and exterior of B’nai Jehudah’s sanctuary at 69th & Holmes.