The Birth of Brotherhood 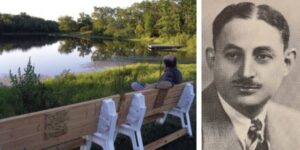 In his second month in Kansas City, Rabbi Berkowitz organized the Men’s Temple Club, which was the forerunner of the present Brotherhood. The Men’s Temple Club affiliated with the National Federation of Temple Brotherhoods in 1926. Its membership reached 320 that year, virtually as large as the roster of the congregation itself.

Temple membership and revenue declined during the Great Depression as people sought to cut expenses. The Men’s Temple Club was negatively impacted by the hard times and was unable to continue its costly lecture series. The club was disbanded in 1931.

After five years with no men’s auxiliary, Rabbi Samuel Mayerberg encouraged two Temple leaders to recreate a men’s group in 1936. Those men were Sidney Altschuler, a past president of the congregation, and Irvin Fane, an attorney and up-and-coming younger leader. Fane served as B’nai Jehudah’s president from 1940-45 and was chairman of the board of the UAHC (now URJ) from 1963-67. In 1951, he was a founding member of the law firm of Spencer, Fane, Britt & Browne.

Early Brotherhood meetings were planned to create a heightened awareness of Jewish values. Brotherhood members began ushering at Friday night services, a practice that continued for many decades. The auxiliary sponsored Boy Scout Troop 2 that met at B’nai Jehudah for decades. It also supported the Jewish Chautauqua Society that promoted interfaith activities and education.

Members of a Brotherhood committee regularly visited Jewish inmates at the penitentiaries in Leavenworth and Lansing, Kansas. Other Brotherhood members taught night courses in English for newly arrived German-Jewish immigrants.

In 1938, Brotherhood devoted itself to finding sponsors who would help rescue German and Austrian Jews who were without relatives in the United States. B’nai Jehudah members sponsored a number of refugees through Brotherhood’s initiative. Our members further assisted with job placement. Many of these immigrants stayed in Kansas City and became Temple members.

Brotherhood sponsored an annual dinner-lecture series from 1955-1964. This event featured nationally known speakers and drew large attendance. After that program ended, Brotherhood focused on service-centered programming. These activities included an annual interfaith dinner, a monthly luncheon with the Rabbi series, an annual retreat, traffic supervision in the Temple parking lot and continued support of the Jewish Chautauqua Society. Membership stood at around 400 men in the mid 1960s.

Jerome Cohen served as Brotherhood president from 1965-66, and later served as B’nai Jehudah president, 1980-82. Cohen was a successful Kansas City businessman who had a vision to create a retreat center that would be operated for the community by Brotherhood. With Cohen’s financial support, 91 acres of land in Cass County, MO, was acquired in the 1970s to create the Jeannette and Jerome Cohen Retreat Center. Brotherhood operated the property and later gifted it to the Congregation in 1984. The facility had fishing ponds, dormitory sleeping rooms and a kitchen/dining hall. It was used for over 40 years for retreats by confirmation classes, Israel pilgrimage and youth groups, for the annual Brotherhood fishing derby and by other groups. Following an in-depth feasibility study, B’nai Jehudah sold the property to a private individual in 2014, due to infrequent use and high maintenance costs. Proceeds were placed in B’nai Jehudah’s endowment fund and continue to support retreats.

Since 1936, Brotherhood has provided an outlet for its members to make friends, enjoy the fellowship of fellow temple members and enhance the quality of congregational life.