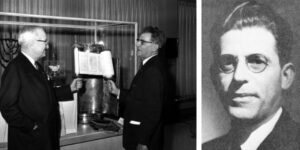 In 1926, B’nai B’rith District Grand Lodge No. 2 held its district convention in Kansas City and elected Rabbi Samuel Mayerberg of Dayton, Ohio as president. He impressed members of the Kansas City Jewish community with his eloquent, vibrant personality and infectious enthusiasm. So when Rabbi Harry Mayer retired from B’nai Jehudah in 1928, the Congregation recruited Samuel Mayerberg to become its rabbi.

Rabbi Mayerberg was born in 1892 in Goldsboro, North Carolina, where his father served as a Reform rabbi for nearly 40 years. Samuel enrolled in the University of Cincinnati and Hebrew Union College at the age of 16 and received his ordination in 1917. He was married to Gertrude Rothschild two weeks later. Mayerberg first served as an assistant rabbi in Detroit and then had his own pulpit in Dayton 1920-1928.

Rabbi Mayerberg joined B’nai Jehudah when he was 36 years old and set his energies to strengthening the congregation’s spiritual life and its influence in Kansas City. He initiated adult Bible study classes; the class for men met with Mayerberg weekly for more than 20 years. He successfully advocated for changing the name of Sunday school to religious school, a designation that continues to this day. Mrs. Mayerberg reorganized a children’s choir that had not been active for several years.

In 1929, the Rabbi requested that parents keep their children home from public school on the first and seventh days of Passover in order to attend temple services: most did. Later that year, he encouraged a conscientious celebration of Chanukah for all eight days and asked Temple families to refrain from having Christmas trees in their homes.

Rabbi Mayerberg’s focus also extended beyond the Congregation. He initiated various interfaith activities that continued for decades. The National Conference of Christians and Jews honored him in 1955 for “having established a spirit of friendship between clergymen and lay leaders of all faiths.”

Mayerberg was quick to speak out when he saw injustice. One of his early stands was a sharply worded letter published in 1930 by The Kansas City Star on its front page, protesting a plan of the local Council of Clubs to present a Passion Play in Kansas City. Passion plays have been a source of anti-Jewish sentiment for centuries. While the play went on, Mayerberg received sympathetic understanding from the city’s leading liberal Christian clergy.

Rabbi Mayerberg next set his sights on the president of the University of Missouri in Columbia. The issue began with the controversial firing of a sociology instructor and grew into an investigation of general academic conditions at the university. The MU President was dismissed from his post in the month following the Rabbi’s call for his resignation.

In 1931, Mayerberg called Missouri’s governor and asked him to dispatch the National Guard to intervene in a planned lynching in Maryville, Missouri. While the governor agreed, the troops did not stop the mob rule that resulted in the death of an African American man that day.

Rabbi Mayerberg was best known in the community for his fight against the political machine of boss Tom Pendergast, chairman of the Jackson County Democratic Party. Mayerberg called out graft, political patronage and influence peddling as wrong and unjust. He believed that provisions of the city charter were being illegally applied for personal gain. He was quoted in the May 23, 1932 issue of The Kansas City Star, “You’ve turned your city over to a gang and given it into the hands of crooks and racketeers because you’ve been asleep. The time has come for action.”

The Rabbi organized and served as the first president of the Charter League that sought to circulate a petition calling for the recall of the entire city council. The entrenched politicians and racketeers fought back aggressively. They tapped the temple’s telephone line and ransacked files in Mayerberg’s study. As he drove to a meeting one night, the Rabbi’s car was forced to the curb and a gunshot was fired at him. For weeks after this incident, two bodyguards accompanied Mayerberg wherever he went, including to temple during services.

Strong pressure was put on the congregation to put a stop to the rabbi’s crusade and some members resigned in protest. Eventually, the B’nai Jehudah Board of Trustees insisted that the rabbi devote himself entirely to the work of the congregation. It took seven more years for Federal investigations and grand juries to expose the corruption that Mayerberg alleged. Pendergast was sentenced to prison for tax evasion in 1939 and a non-partisan city government was established in 1940.

In 1933, Rabbi Mayerberg turned his attention to the rise of Nazi power in Germany. Even at that early date, he preached that the Spanish Inquisition was not as bad as the rapidly accelerating peril in Germany. He felt confident that “the Jews of America will not look quietly on the extermination of some 600,000 of their co-religionists in Germany.” He later supported Israel as a destination for Jewish refugees.

In 1957, Missouri Governor James Blair appointed Mayerberg as the first clergyman in Missouri to serve as a commissioner of the Kanas City Police Board. He displayed a keen interest in the personal welfare of individual police officers during his term as commissioner. He became the first Rabbi to receive appointment as a police chaplain.

After nearly 32 years at B’nai Jehudah, Rabbi Mayerberg asked the board to be permitted to retire in June 1960, soon after his 68th birthday. He was elected Rabbi Emeritus and served in that role until his death in 1964.

Rabbi Mayerberg was one of fourteen people who distinguished themselves as Jews in the field of social justice as listed in Giants of Justice by Albert Vorspan, published in 1960. Others included Louis Brandeis, Albert Einstein, Stephen S. Wise and Henrietta Szold.

Through it all, Samuel Mayerberg was a beloved and revered rabbi, teacher and friend. The Mayerbergs did not have children, but formed many deep friendships within the congregation. While he was a fearless soldier in his public career, congregants knew Rabbi Mayerberg as a kind, gentle man who guided his people to “love mercy and to walk humbly with God.”