B’nai Jehudah bought two acres of land in Elmwood Cemetery in 1872, and it served our needs for 47 years. By this time, Kansas City was growing south and the Congregation needed more burial space for the future.

In 1919, we paid $15,000 for a ten-acre tract of farmland on the far southern outskirts of the city for our next cemetery. Located at 69th Street and Troost Avenue, the B’nai Jehudah Rose Hill Cemetery was situated in the general area where the last skirmishes of the 1864 Civil War Battle of Westport were fought. 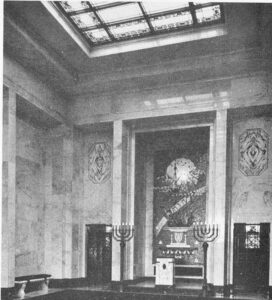 The Congregation financed the acquisition and development of Rose Hill through the sale of bonds to our members. The offering was for $35,000 of 5% bonds due 1940. The bonds were not fully retired until 1952 due to financial pressures caused by the great depression.

Rose Hill was dedicated October 9, 1921, and the first internment occurred the same day with more than 500 people in attendance. Joseph Liebman was a 1911 B’nai Jehudah confirmand who died fighting in France in 1918, during World War I. Liebman was initially buried at Elmwood but was moved to Rose Hill as its first internment to honor his service and sacrifice. The tall, granite monument that was placed on Private Liebman’s grave is the only one of its kind at Rose Hill. By design, all other graves are identified by flat, uniform bronze markers to this day.

Henry A. Guettel was a successful retail merchant in the area (Palace Clothing Stores) and served on B’nai Jehudah’s board from 1907-1921. After his death in 1921, Mrs. Martha Guettel provided a generous gift to construct a chapel at Rose Hill that was named the Henry A. Guettel Memorial Chapel. It had seating for 50 people and eight crypts exclusively for members of the Guettel family. The chapel was regularly used for funeral services until the completion of the Rose Hill Mausoleum with its own chapel. Henry and five other members of the Guettel family are now entombed in room N of the Rose Hill Mausoleum. 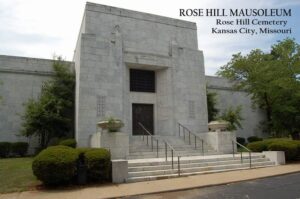 When B’nai Jehudah was searching for a new temple site in the 1950s, it chose land just to the west of Rose Hill Cemetery. This contiguous location proved convenient during the years that the Congregation was located at 69th and Holmes, 1957-2003.

In 1961, Rabbi William Silverman initiated an annual memorial service at Rose Hill that continues to this day on the Sunday afternoon during the high holidays. Normally held in the mausoleum chapel, the memorial service was held outdoors in 2020, due to social distancing mandates related to the Coronavirus pandemic.

In 2015, we learned that Rose Hill was one of seven community beneficiaries of a generous endowment fund created by the late Christa Louis. Christa and her husband Stanley were the previous owners of Louis Memorial Chapel, which has served the Jewish community with dignity for decades. Their gift provides a significant perpetual income to assist in maintaining Rose Hill to the highest standards.

The B’nai Jehudah Cemetery Committee has used the Louis endowment support and other funds to improve and beautify Rose Hill over the past few years. Recent improvements include a new western fence, road resurfacing, a new roof and power washing of the mausoleum, refurbishing the original entrance gates, tree trimming and new gardens and plantings.

The Congregation maintains a perpetual care fund for Rose Hill and a portion of all grave sales are committed to this fund.

(Adapted from Roots In A Moving Stream by Frank Adler, z”l)
February 5, 2021
Photo Captions: Chapel and exterior of the Rose Hill Mausoleum.