After 20 years in the downtown Oak Street Temple, B’nai Jehudah was exploring a new home in 1905. Kansas City was growing and land south of 31st Street was being developed as a neighborhood of fine homes. The Congregation had about 200 member families and approved a plan to construct its third building. B’nai Jehudah sold the Oak Street Temple for $75,000 in 1906 and rented back from the new owner until a new temple could be completed. 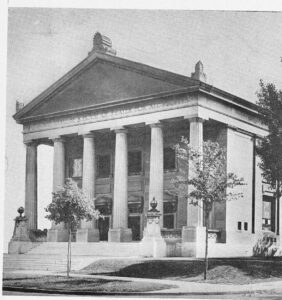 The new location was a site at the southeast corner of Linwood Boulevard and Flora Avenue. The land was purchased in 1906, for $16,000 from Colonel Thomas H. Swope who earlier donated the land for Kansas City’s Swope Park. An architect and members of the building committee visited newly built temples in St. Louis, Louisville, Cincinnati, Detroit and Cleveland for design ideas. The membership approved a design of “pure classic style, following the examples and proportions of the Pompeian Doric” and ground was broken on May 13, 1907.

The most distinguishing and highly prized feature of the Linwood Boulevard Temple was its 20 stained glass windows by artist John La Farge. He was renowned for his “Battle Window” at Harvard University and the “Peacock Window” now held in the collection of the Worcester (MA) Art Museum. B’nai Jehudah’s commission is believed to have been the only one La Farge accepted for a Jewish house of worship. The temple’s windows typified ten periods in Jewish history and cost a total of $6,000. Sisterhood agreed to assume responsibility for a substantial portion of the building’s furnishings so that the windows could be acquired within budget. Four of the La Farge windows were reinstalled at B’nai Jehudah’s current building on Nall Avenue with the 2019 renovation. One is integrated in the Menorah Medical Center chapel.

The Linwood Boulevard Temple represented a total investment of $140,000. The pipe organ and Ner Tamid from Oak Street were moved to the new temple. The old ark was donated to a Jewish congregation on Admiral Boulevard and Tracy Avenue, a forerunner of the present Congregation BIAV. Words from the Book of Isaiah were engraved in stone over the portals of the temple: “My house shall be a house of prayer for all peoples.”

The congregation and guests crowded the new temple for two services of dedication on Friday evening and Saturday morning, September 11 and 12, 1908. The dedication was front-page news in the September 12 Kansas City Times: “Many who could not gain entrance stood on the broad steps and on the sidewalk to catch the strains of the anthems rendered by a choir and chorus…The interior of the temple shone from hundreds of electric light bulbs which studded the paneled ceiling.”

All of B’nai Jehudah’s former rabbis who were still living participated in the dedication.

The convenience and modernity of the Linwood Boulevard Temple created an immediate upsurge in membership and participation. By June 1909, membership had grown to 300 families. Attendance at Friday night Shabbat services averaged 250 and was 100 on Saturday mornings.

The I.E. Bernheimer Memorial annex was built in 1921. This two-story addition contained a meeting room with stage and balcony, classrooms and a library. The Bernheimer family donated about half of the cost.

The Linwood Boulevard Temple was our home for nearly five decades until we moved south to 69th and Holmes in 1957.