We lost our second rabbi in succession to Philadelphia with the departure of Rabbi Henry Berkowitz in fall 1892. The Congregation quickly began a search for a replacement and 28-year old Rabbi Samuel Schulman gave a “trial sermon” at B’nai Jehudah November 11, 1892. At the end of the service, “the congregation came forward almost in a body, both to bid him welcome and to congratulate him.” He was hired. 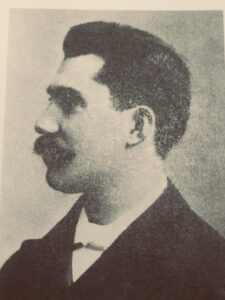 B’nai Jehudah maintained its reputation as the home of great rabbis under Samuel Schulman.  His six-year stay in Kansas City was described as “a series of successes” in which he captivated the community “with the brilliance of his intellect and depth of his mentality.”

Samuel Schulman was born in Russia and came to The United States with his family at the age of four in 1868. He began to study Talmud at age eight and was awarded a four-year scholarship to attend a Reform seminary in Berlin where he was ordained. Rabbi Schulman was the only rabbi of B’nai Jehudah since 1883 who was not ordained at Hebrew Union College. Upon his return to the U.S. in 1889, he briefly served in a temple in New York City before becoming the pioneer rabbi in Helena, Montana.

Schulman had a rare gift of oratory and the resonance of his voice filled the Oak Street Temple sanctuary. Congregational singing at services came into vogue with the introduction of the Union Hymnal during his tenure at B’nai Jehudah. He discontinued Saturday morning children’s classes and added a full hour to the Sunday morning schedule. What had previously been termed Sabbath school became Sunday school in 1893 and enrollment was about 125 students.

The Temple committees that had assumed responsibility for aiding underprivileged people in our community ceded these roles to community-wide organizations during the 1890s. Rabbi Schulman helped launch the Kansas City Section, National Council of Jewish Women. This charity took over the operation of the Industrial School for Girls that was still housed at B’nai Jehudah.

Rabbi Schulman was a good community ambassador for the Congregation. In 1893, he was invited to speak at the dedication of a new orthodox synagogue that was the forerunner of Congregation Ohev Shalom. He was a frequent speaker in the liberal Protestant pulpits of the city. And on St. Patrick’s Day in 1895, he gave the principal address at a gathering of 3,000 Irish-American Catholics. He actively promoted inter-faith cooperation.

In October 1895, B’nai Jehudah celebrated its 25th anniversary with speeches by several visiting rabbis and dignitaries. A lavish banquet was held at the Progress Club on Quality Hill and guests were attired in formal evening dress.

Schulman took strong stands from the pulpit. He spoke against Zionism, typical of many Reform rabbis of that era. He also argued that retail stores should be able to stay open on Sunday. He urged congregants to oppose a petition that would have introduced Bible readings in public schools here. The Kansas City Board of Education sided with the congregation and denied the petition.

In 1898, his fifth and last year full year at B’nai Jehudah, Rabbi Schulman urged the congregation to build an even larger temple that would accommodate all the Jewish people of Kansas City on the high holy days. This aspiration was discussed for several months but was tabled following a congregational vote later that year.

Like his two immediate predecessors, Rabbi Schulman was recruited to a Reform synagogue in the east. Temple Beth-El in New York City invited him as a guest speaker in November 1898 and he delivered the same speech that landed him the job at B’nai Jehudah. He was offered the job as Associate Rabbi of that congregation and Schulman asked for B’nai Jehudah’s release from his contract from the pulpit on Friday night November 18. The Kansas City Star reported that “the women in the congregation were nearly all weeping” after his emotional address. B’nai Jehudah acquiesced and Rabbi Schulman accepted the job in New York as Associate Rabbi.

Samuel Schulman was promoted to Senior Rabbi of Temple Beth-El in 1903 and served as President of the Central Conference of American Rabbis 1911-13. When Temples Beth-El and Emanu-El merged in 1927, he became rabbi of the consolidated Congregation Emanu-El of the City of New York, the largest Reform synagogue in the world at that time. He was rabbi emeritus from 1934 until his death in 1955 at the age of 91.