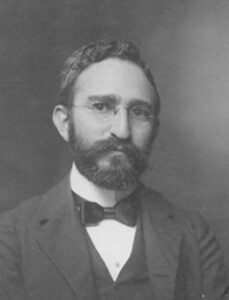 Rabbi Berkowitz’s first pulpit was Congregation Sha’arai Shomayim in Mobile, Alabama. The Mobile congregation was founded in 1844 and, like B’nai Jehudah at the time, was primarily comprised of families with German roots. The Rabbi visited Kansas City in February 1888 to perform the wedding ceremony of his brother, William Berkowitz to Emile Block. While here, he addressed the congregation at the board of trustee’s invitation. The “young Rabbi from the South” made a favorable impression and was hired to fill B’nai Jehudah’s empty pulpit. He began here May 25, 1888 and was the Congregation’s first American-born Rabbi.

One of Rabbi Berkowitz’s first efforts here was a teacher training class that he conducted during the summer of 1888. He also applied himself to forming personal relationships with the Congregation’s members, calling on them and the unaffiliated in their homes or inviting them to his study. These conversations revealed a desire for congregants to become more actively involved.

The Rabbi’s solution was to organize the L.A.C.E auxiliary society to promote Literary, Aid, Congregational Cooperation and Education. B’nai Jehudah’s board supported the plan and by the end of two months, 120 members were participating.

He also organized 17 Kansas City charities (both Jewish and general community) into a Bureau of Associated Charities. It was funded by Jackson County and Rabbi Berkowitz became its first president in 1889.

Jewish immigration from Eastern Europe accelerated in the early 1890s and the Rabbi started a community-wide “Russian Aid Committee.” Fundraising went to help settle these immigrant families in cottages at McClure Flats, a settlement near 19th and McGee Streets. The daughters of these new families were taught needlework skills at the Industrial School for Girls (later Ida M Block Industrial School) at B’nai Jehudah. A bathhouse was located in the caretaker’s home in the back of the Oak Street temple. Most of the new arrivals did not relate to Reform Judaism and joined orthodox congregations.

Rabbi Berkowitz became the first rabbi to speak from the pulpit of any Christian church in Kansas City after developing a warm friendship with Bishop B.B. Ussher of Christ Church (Reformed Episcopal). In 1889, he was a charter member of the Central Conference of American Rabbis (CCAR). In June 1892, he headed Missouri’s delegation to the National Conference of Charities and Corrections in Denver.

In 1891, B’nai Jehudah renewed Rabbi Berkowitz’s contract through 1895. The next year, his brother-in-law, Rabbi Krauskopf, encouraged him to come to Philadelphia to succeed the retiring rabbi of another temple there, Congregation Rodeph Shalom. Berkowitz visited Philadelphia and was offered that pulpit. He asked B’nai Jehudah to release him from his contract, citing the potential of being able to make a greater impact in the larger city of Philadelphia. B’nai Jehudah acquiesced and his last services here were high holidays 1892.

Berkowitz continued his rabbinate with distinction in Philadelphia, serving as Rodeph Shalom’s Rabbi for 29 years. He founded the Jewish Chautauqua Society in 1893 and led its growth. Rabbi Berkowitz was an opponent of Zionism and delivered a lecture to the CCAR convention in 1899 entitled, “Why I am not a Zionist.” He signed a petition delivered to President Woodrow Wilson against supporting a Zionist state and opposing the Balfour Declaration. The petition anticipated conflicts with other inhabitants of Palestine but could not foresee Nazi atrocities and need for a Jewish home.

Rabbi Berkowitz returned to B’nai Jehudah as guest preacher on many occasions. Each time he was welcomed as a beloved rabbi.

Henry Berkowitz and his sister Rose had a lasting influence on Kansas City beyond their short years here. Their two brothers, William J. and Maurice Berkowitz, also moved to Kansas City in the 1880s and went into the printing business. The business evolved into Tension Envelope Corporation, a national leader in its industry. A Berkowitz descendent, Richard Berkley, became Kansas City’s first Jewish mayor in 1979.