With ambitions for a larger, grander building in mind, B’nai Jehudah sold its first temple at 6th and Wyandotte in the spring of 1883 for $15,500, more than twice the cost eight years earlier. The Congregation rented back from the buyer for $66.67 per month during construction of its new Oak Street temple.

Ground for the new building was purchased at the southwest corner of 11th and Oak Streets and construction commenced before the end of 1883. Construction fell behind schedule due to a shortage of bricks resulting from a building boom in Kansas City. Money was another problem. The proceeds from the sale of the old temple, together with donations from members and a $10,000 mortgage loan from B’nai B’rith District Grand Lodge Number 2 left about $25,000 more to be raised to meet the total cost. The congregation had another successful “fair” which raised $15,000.

The new building was a significant upgrade from the Congregation’s first permanent home. The original temple was a frame structure while the Oak Street temple was built of brick on a limestone basement foundation. The new temple seated 600 worshippers on the main floor and an additional 85 in a rear gallery, nearly double the capacity of the 6th and Wyandotte building. Side galleries were added in 1890 to expand capacity by 150.

The Oak Street temple had a Moorish design with twin towers topped by onion cupolas. A special feature of the temple interior was its ark. It was part of the west wall that copied the façade of the Oak Street entrance in miniature. Departing from Jewish tradition, the Congregation’s worshippers would not face East in the direction of Jerusalem. This decision reflected B’nai Jehudah’s Reform approach.

Construction was completed in the summer of 1885 and the building was dedicated September 4 and 5 of that year. A procession of children bearing American flags began the ceremony to a packed house on Friday night. The Torah scrolls were placed in the new ark, the Ner Tamid was lit and Rabbi Isaac Mayer Wise, the founder and leader of the Reform movement in America, gave the dedication speech. 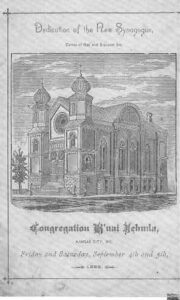 The Oak Street temple may have been designed and built for the ages, but it only served as the Congregation’s home for 23 years. B’nai Jehudah moved south to a new temple on Linwood Boulevard in 1908. The original 6th and Wyandotte building was razed after the Congregation moved out.